What do you do during week five without school? You buy a wireless Xbox controller and illegally sideload a Nintendo 64 emulator onto the Apple TV and blow the minds of two young kids who have only ever used touch screens. 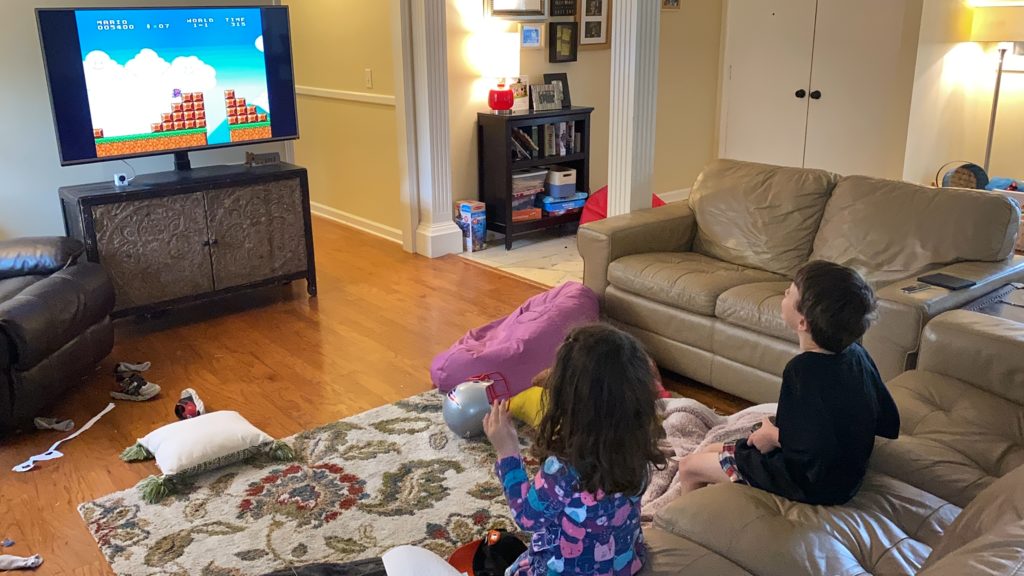 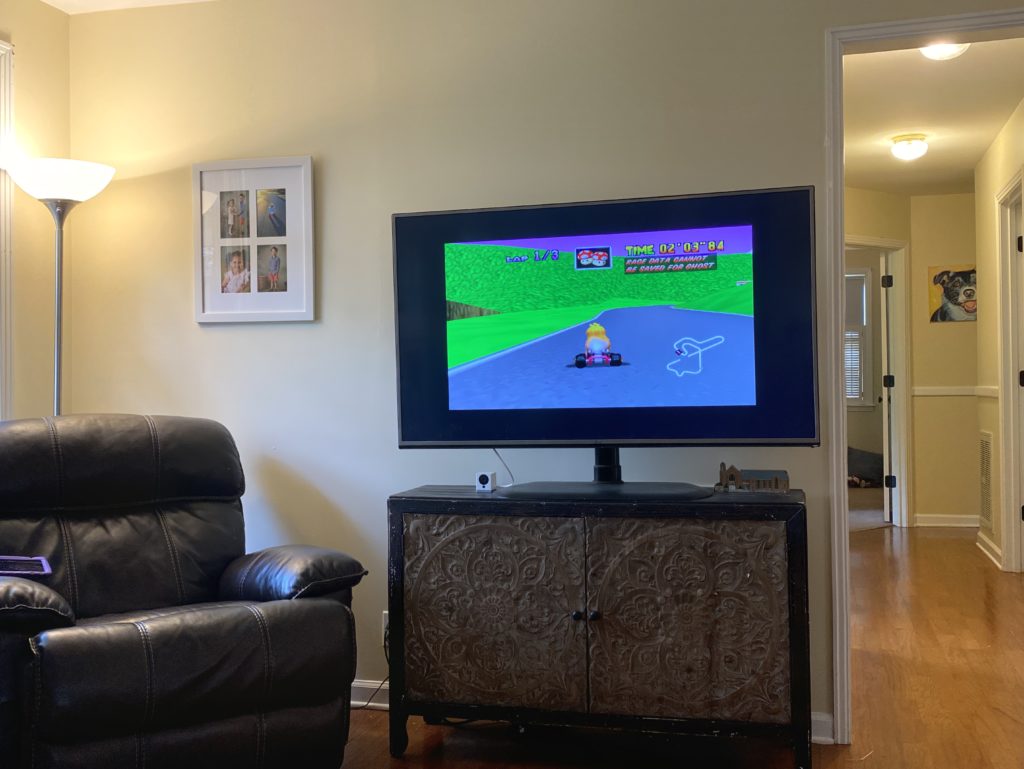 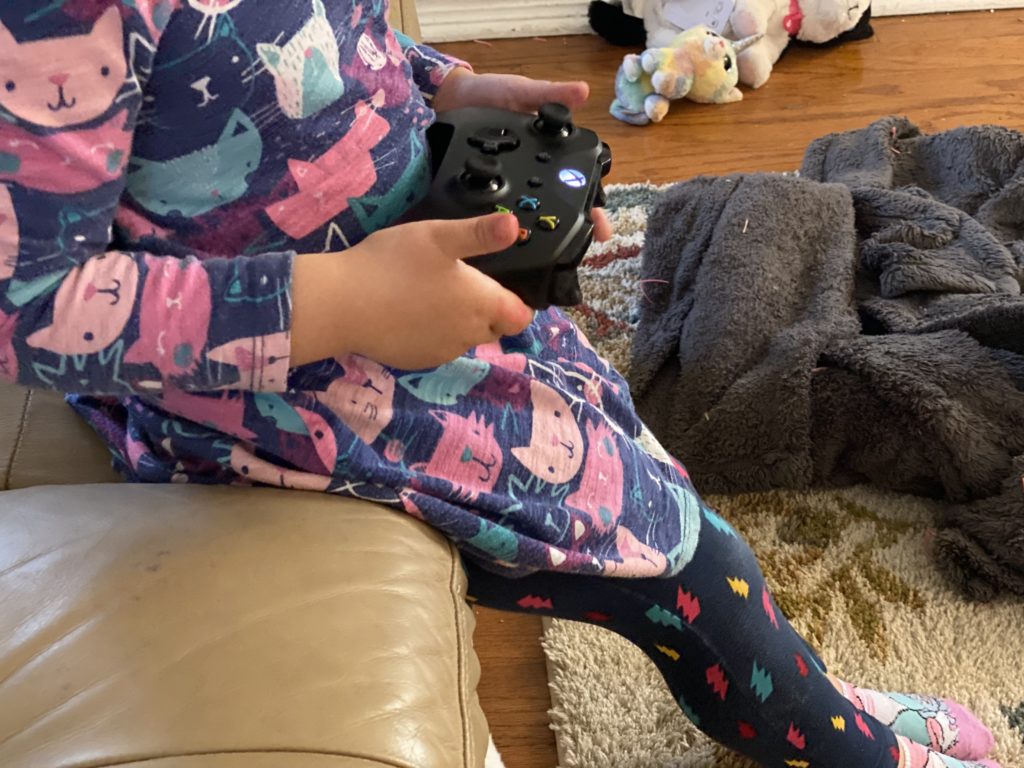 After an hour of NES and SNES Mario games for the first time in his life, I load up Mario 64. A moment later…

"OH MY GOSH! I DIDN’T KNOW MARIO CAN WALK BACKWARDS!!"

With Tennessee finally and thankfully instituting a shelter in place order beginning at midnight tonight, we got up early this morning to clean out the side garage so the kids will have extra space to play on rainy days. We did it today because the new regulations mean essential trips only going forward (not that I expect any of the idiot local yocals around here to follow them), so today will be our last chance to haul away all of the garage junk that’s gathered over the past year.

But none of that is interesting. The point of this post is the conversation I had with A on the ride to and back from the recycling center. He’s six and knows full well that the world is full of bad germs now and he needs to be extra careful and can’t see his friends. He also openly calls it "the coronavirus", too. We’re not trying to sugarcoat the world for him or his sister (to a degree, of course).

He obviously doesn’t get the gravity of the situation at his age, but the longer this continues, the more his mind is starting to pick up on things and ask deeper questions. During our thirty minutes in the car this afternoon…

When can we go on a vaction again? I want to go somewhere that’s not our house.

We can’t go anywhere right now because there are germs. We have to stay at our house.

But we stay in a house at vacation? So there’s no germs there.

That’s not our house. That’s someone else’s house – and they could have germs. And the beach could also have germs cause there are so many people there.

But why do you and mommy still get to go places? Me and H have to stay home all the time?

I won’t transcribe our whole conversation that followed. I’ll just say that I never expected at this age to have to explain to him the definition of an "acceptable risk". I told him that we have to have food to eat, so that means we still have to go to the grocery store – just not as often. It’s an acceptable risk. And I know he would like to go play at the park, but the park isn’t a "have to" – we can still play at home. That means going to the park is a risk we can’t take.

Later, the topic of school and his kindergarten class came up. No one in our city, county, or state is providing any leadership, making decisions, or taking responsibility. And I get that there are a thousand-and-one unknowns right now, but it’s leaving the public – especially parents and business owners – in a perpetual limbo state.

His school has already been closed for a month. It’s now April. And yet, the only communication we get from the school district is that they’re evaluating the situation as it develops on a weekly basis. And the most they’ll commit to is saying schools are still closed for the next two weeks. But at this point we all know what’s coming. California and Vermont (and others?) have officially cancelled the rest of the academic year. It’s time to call it here and everywhere else, too. Kids are not going to come back to school just to attend classes for a few extra weeks before breaking for the Summer. I’m honestly not even that optimistic about the next school year even being able to start in August as scheduled.

And with that uncertainty in the air, we’ve had to string the kids along, too. But this afternoon I finally just told him.

Remember last year when you had your graduation at the Frog School? (His daycare’s mascot was a frog.) And then after Summer you started Kindergarten? Well, Kindergarten is finished now, too. You’ve graduated. And when you do go back to school next year, it will be the same school, and some of your same friends, but you’ll be a first grader. You’re not a kindergartner anymore.

As a father, finally addressing the finality of the situation was sad. He’s got many more years of school ahead of him (I hope). But at least here in American society, your kindergarten year – the first year in the public school system – is such a milestone. We amped it up and talked about it with him the whole calendar year from January up until his first day of class last August.

And now it has evaporated. He didn’t get a fair shot at it.

We’re extraordinarily lucky that, for now, we’re safe. We have our health. My wife and I still have our jobs. And other than being unable to find toilet paper locally, as scary and infuriating as the world is right now, for us, for me and my family specifically, so far we’ve only been inconvenienced. We haven’t grilled burgers in a month. We weren’t able to buy eggs for the kids’ breakfast last week. We haven’t had a date night or even just taken the kids out for crappy fast food.

And, so, while possible – as long as this period of uncertainty lasts and as long as we specifically are ok – our number one goal is keeping them safe and trying our best to provide normalcy. Because, soon, things aren’t going to be normal any longer. When the effects of a collapsing economy start trickling up and having day-to-day implications on those of us still clinging to "good jobs"? If one of us gets sick? If the small business I work for goes under? If the public company my wife works for has layoffs? If a friend, a family member, someone we love…one of us? Dies?

I’m very, very afraid that none of those are ifs. They’re whens.

Life has already kicked my ass many times. On a few occasionans I wasn’t sure if I would recover. When it happens again, I’ll do what’s neccessary.

No comments to show.